Some years ago, I heard Eyedea’s song Here For You, released in 2002. Like in much of his music, beautiful imagery fuses with a poignant and poetic commentary on existence, humanity and the natural world.

Go check him out!

Here for You by Eyedea charts the course of a river – and our lives – as we pass through time.

Like a river, we only move forwards, never backwards, and are subject to both internal and external forces that change our courses both temporarily and permanently.

Though often fast-paced, jagged, chaotic and rocky in the upper course, the processes of a river tend to stabilise over time to take on greater capacity and ultimately, a more gentle form that allows for reflection and calmness.


We’re all born into this river without knowing how to swim
And eventually, we learn how to keep the water under our chins

The scenery we pass on our journey downstream become the scenes of our memories, the physical and emotional landscapes that form the backdrop of our lives. The dynamic ensemble of life’s many nuances carve our path through time and space, carrying us onwards downstream.

We’re carried by the current, being driven by the wind

There will be moments when we are reminded of our powerlessness, where we cannot influence forces that lie beyond our control. These moments can also help us reflect on the scale of our improbable existence.

And sometimes when I watch myself float downstream

I see the beauty of it all, and it feels like a dream

And at that time I appreciate the river’s course

Eyedea’s lyrics help us confront this struggle of control. We cannot escape time’s constant forward motion and must eventually learn to make peace with the fact that we have an ultimate destination, but we are also reminded also that this ultimate destination is not the end.

We are all components of time’s constant motion and exist together as part of an intrinsic whole. We cannot be separated from it, from each other, or from the Universe.

Now I want you to know
The role you play is part of the whole
Without you, it couldn’t be, and I mean that with compassion
So if you need anything, I mean anything at all
I’m here for you; all you gotta do is ask man

This earthly account of life and the peculiarities of time is humbling. After all, a river is relentless, it forges on and finds a way to overcome obstacles.

Once a river eventually reaches the sea, its ultimate destination and point of release, it is relinquished but recycled and eventually, some will eventually return to the source. Most of its matter – the stuff that makes it – remains in-tact.

Once we reach our point of release, we cease to exist as a single entity, or a construct that is stronger than the sum of its parts; flesh, blood and bone, cells and the infinitesimally small atomic and subatomic particles that lie within each and every structure.

But nevertheless, these fundamental components persist and sometime, somewhere, they will eventually form a new entity.

This process of generation and decay, as far as we know, is infinite.

Each person in an intricate piece of infinity

The constant motion and lifecycles of matter apply on a grandiose universal scale also.

Eyedea says the stars are a reflection of what we are – what Earth is – and this is true. Homogenous processes of genesis and decay are happening constantly everywhere in the Universe.

I know you feel alone, but just look up at the stars

And everything that is out there is what you really are

Whilst this may at first seem like a romantic idea that fits the narrative of the song, it is backed by science.

In 2015, NASA Astrophysicist Karel Schrijver and Stanford Pathologist Iris Schrijver authored the book Living with the Stars: How the Human Body is Connected to the Life Cycles of the Earth, the Planets, and the Stars which explains and analyses the intrinsic links that exist between the lifecycles of structures here on Earth – including us – and the lifecycles of stars and planets, connecting all the way through to the Big Bang.

The authors cite, discussed further in articles by the Natural History Museum and National Geographic, that there is little doubt that many of the elements in our bodies formed in stars some 13 billion years ago and have come through several supernovas to eventually end up a part of us. Some, like lithium, may have even originated from the Big Bang itself.

There is another layer to the story also, as our cells constantly regenerate and most fully replenish several times over our lifetime. The food we consume to fuel cell formation is not only formed from the stardust that has always present here on Earth, but also stardust that is constantly landing on Earth and absorbing into it. In fact, recent estimates suggest some 5 – 300 metric tonnes of cosmic dust fall on Earth every day averaging some 40,000 tonnes a year.

This has been happening for a long time – Earth is 4.5 billion years old.

The lifecycle of ‘things’ ranges from the universal macro of the Big Bang and the stars that form the universe’s some 100 billion galaxies to the tiniest, most intricate structures that reside within us and all other living things.

Every structure shares impermanence through these mechanisms of constant degeneration, decay and genesis.

Nothing is lost but forever overlapping, and each overlapping piece is an intricate piece of infinity.

We are cut from the same universal tapestry as the stars above us, literally made from stardust, the same stuff as rivers, mountains, plants, dirt, animals, the air we breathe, the money we spend, each and every commodity we take for granted, the screen you’re staring at, the fingers you’re scrolling with, the Pale Blue Dot and the sunbeam it’s suspended in.

At the Start of the Universe…

To understand this, we have to take a look at how the 88 natural elements of the periodic table were created. I feel it’s my liability as a writer to admit this is not my area of expertise, but this is my intuitive understanding of the popular scientific consensus on this subject.

During the Big Bang, subatomic particles like quarks formed into protons and neutrons which eventually combined into nuclei. This process is called nucleosynthesis. Hydrogen, helium, lithium, and beryllium nuclei were produced at first but the Universe was too hot for them to attract electrons and become atoms.

So, at this early stage, we had just the 4 elements – the lightest of all elements.

But there are 88 natural elements, so where did the rest come from?

As the Universe sat in a reactive and rather chaotic post-Big Bang soup for millions of years, something began to stir. The Universe began to cool, allowing the 4 elements to attract electrons and transform into atoms.

These atoms were then attracted to each other and formed huge clouds that reached temperatures of millions of degrees in places via gravitational pressure. This pressure eventually fused hydrogen isotopes into helium, thus instigating the process of atomic fusion, and massive energy release. At this stage, the force of gravity pushing inward was still much stronger than any outwards force created by fusion, and clumped matter began to form protostars.

After millions of years, these early protostars eventually reached a critical point where outwards energy created by fusion was balanced finely with gravity pushing inwards, allowing them to expand, ignite and progress through the T-Tauri star phase and into what is known as the ‘main sequence’, forming an expanded star like the Sun, stabilised and sustained via the process of fusion.

Remember, at this stage, we still only have the 4 lightest elements – hydrogen, helium, beryllium and lithium.

These early stars burned and slowly used up their hydrogen, the main fuel of a star, progressively fusing it into helium via the process of fusion. Once the hydrogen at the core of a star is used up, the energy sustaining it begins to wain. The star may then expand into a Red Giant as it burns hydrogen in its outer layers in an attempt to stay lit. Red Giants are huge stars that can reach sizes of many times of that of our Sun. The star then turns to its next potential source of energy, helium, which releases little energy when fused compared to hydrogen. Helium is then fused into carbon, nitrogen and oxygen.

We now start to see other elements emerging

The next processes do vary but essentially, the star begins to degenerate and die. Smaller stars contract as helium disappears and they turn into a white dwarf, a very bright star with a luminosity up to 1 million times that of the sun.

Larger stars with more mass, however, do not turn into white dwarves and are now on the path towards novae, the most spectacular explosions in the Universe.

These high-mass stars form enormous supergiants, the most famous, VY Canis Majoris, has grown to nearly 1,500 times the size of the Sun!

As they expand, the star begins to fuse more elements in vain as gravity waits to collapse it, carbon fuses into oxygen, sodium, magnesium and neon.

Neon then fuses into more oxygen that fuses into sulfur, silicon, phosphorus, and magnesium. Silicon fuses into iron and eventually, the core is saturated with iron, releasing huge amounts of energy as the star spectacularly loses its battle with gravity, is immediately crushed and rebounds, just like a ball that has been squeezed, sending a huge shockwave into space – a supernova.

In the preceding moments, the star’s matter becomes so dense that iron fuses rapidly into all the other natural elements in the periodic table up to Uranium. These elements are blasted into space and eventually, they have found their way into us.

This isn’t the only way elements can form – they can also form when neutron stars collide for example, but still, go back far enough in the sequence and you’ll find that we are indeed part of a cosmic process that dates all the way back to the first stars some 13 billion years ago.

Not only has this matter travelled from the origins of the universe to reach its current destination, but it also now forms the backbone of complex life and the only complex life that we currently know exists in the universe.

The lifecycles of all structures; humans, rivers, creatures, and stars, overlap in this mind-bogglingly complex ensemble of processes.

Each person in an intricate piece of infinity 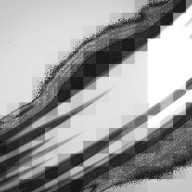